Packed into a 940,000-square-foot facility, City Furniture's headquarters in Tamarac, Florida, houses the company's corporate offices, flagship showroom, and a 750,000-square-foot main warehouse. Having already expanded the building's footprint horizontally at the site, when City Furniture needed to create additional space for both employee training and inventory storage, Managing Director of Facilities Ian Peshel was tasked with figuring out how.

Peshel worked with Billy Lindler Jr., President of United Steel Storage Inc. (USSI), to develop a solution. The two companies have partnered since the 1970s, collaborating on design-build projects in both operations and logistics over five decades. The pair agreed that the addition of two new mezzanines — one located in the warehouse to serve as an extension of the existing corporate offices for training, the other in a different portion of the warehouse for product storage — was the optimal solution.

"For the new training area, we decided to build a single level mezzanine that created about 4,000 square feet of space above an existing employee lounge area that houses a pool table, ping-pong table, and other spaces for our operations teams to use on breaks," explained Peshel, who noted that it was important to maintain the open feel of the space beneath the mezzanine.

"We bring all of our employees here for extensive customer service and sales training; we believe strongly in investing in our infrastructure to invest in our people," he continued.

When Peshel began to work through the design process, he initially considered concrete construction. "We realized that if we built the training mezzanine with a concrete slab floor, the foundations, footings, and support we would have to put in would be very costly," he recalled. "That's when USSI recommended we take a look at ResinDek as an alternative."

City Furniture selected ResinDek LD with the Gray Diamond Seal® 2 finish. ResInDek LD is a cost-effective engineered composite wood flooring that supports dynamic and static pallet jack loads up to 2,000 pounds. ResinDek panels are custom manufactured and available in sizes up to 4' x 10'. The panels utilize a tongue and groove configuration that promotes an effective panel to panel wheel load transfer. Backed by a 10-year warranty, the panels when requested are delivered for installation as a complete system, including corrugated metal decking, collated drill screws, and Cornerstone's ergonomic Stand-up Screw Gun that saves 40% in fastening costs and minimizes fatigue. Further, a detailed drawing showing precise orientation and placement of each panel is provided.

Since City Furniture's training mezzanine structure supported the conventional construction of three separate, occupied, enclosed spaces used to create both classrooms and house the company's Learning and Development Department, the local authority having jurisdiction (AHJ) determined that a fire rated assembly was required. Fortunately, Cornerstone Specialty Wood Products®, manufacturer of ResinDek flooring panels, previously put forth the time, money, and energy to have ResinDek panels independently evaluated and approved for use in Types I-V construction and as part of a fire-resistance rated assembly by the by IAPMO Uniform Evaluation Services – United States ER Number 467 and Canada ER Number UEL 5027. The evaluation included a review of the physical, structural, surface burning, fire resistance and ignition properties of the panels. Additionally, ResinDek flooring system is UL Classified as a fire rated assembly under UL Design Number L701 and UL File Number R39265.

According to Peshel, "To get a fire rating on a non-concrete product — a wood product nonetheless — is pretty rare without massive amounts of fire insulation; this only required a minimal amount fire-retardant spray foam. That was another big win for us choosing the ResinDek," he continued.

Peshel was also surprised to discover ResinDek flooring panel's ability to withstand torrential rain. Peshel explained that even though the training mezzanine was enclosed fresh air was required to be added to the space, so a unit was added to the roof. However, a 10-minute afternoon thunderstorm hit before the contractors could cover up the opening, they had cut into the ceiling of the facility. "Thousands and thousands of gallons of water came in and spilled all over. More than half of the ResinDek flooring was covered in water, and we were convinced we would have to rip it out and replace it," Peshel recalled.

Alerted to the incident, Lindler immediately called Keith Shipman, Cornerstone's National Sales Manager. "I was convinced that the ResinDek was damaged. After all, any wood product that I've ever seen be submerged in water, it deforms or swells. Keith flew down the next day to investigate," said Lindler.

Shipman pulled up the ResinDek panel directly underneath the opening in the roof, as it was the one that was hit by the entire deluge of rain, noted Peshel.

"Keith cut it open and there was zero deformation. He also ran some humidity and moisture checks on the bottom of the panel and noted that there was a negligible difference between the recorded level and the humidity specification range at the manufacturing facility where the panels are produced," continued Peshel. "No swelling. No additional moisture detected. It was quite remarkable."

"After the panel passed inspection, Keith also sent City Furniture a letter confirming that their 10-year warranty on the ResinDek flooring was still valid based on his inspection," Lindler added. "Cleaning up the water only required basic water mitigation work using vacuum dryers and blowers, and there was no damage to the floor. I personally was amazed."

At the same time that the new training mezzanine was being designed and built, so too was a second mezzanine. In a separate area of City Furniture's warehouse, Peshel needed to create additional storage space for clearance furniture products.

"The challenge here was to create as much storage space as possible in an area with a 45-foot height clearance," he explained. "Because we used ResinDek flooring for this mezzanine as well, we were able to build a three-story mezzanine above ground level with 8-foot clearances on each level and gain 15,000 square feet of additional space."

As with the training mezzanine, Peshel initially considered concrete slab construction for the storage mezzanine.

"If we had used concrete, we would have had to use such large columns and footings to support the structure that we wouldn't have been able to use any of the space at grade level; with ResinDek flooring we are able to use the space under the mezzanine because we could reduce the number of columns and use smaller footers," he said. "We literally would not have been able to build anything even similar in size or in return on investment than we could with the lighter weight ResinDek panels."

"Using ResinDek greatly sped up installation because we didn't have to pour concrete then wait for it to cure for 7 to 14 days," he concluded. "Plus, now we know you can submerge it in water and it will come out okay! I don't know of any other wood flooring that would perform nearly as well as ResinDek." 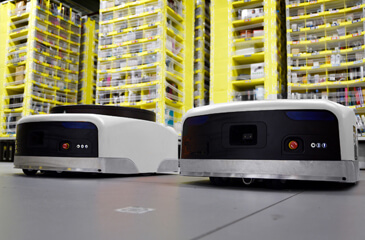 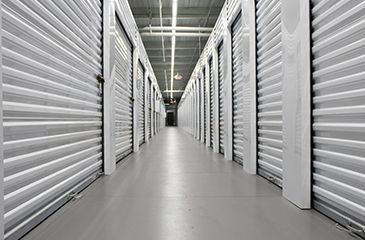 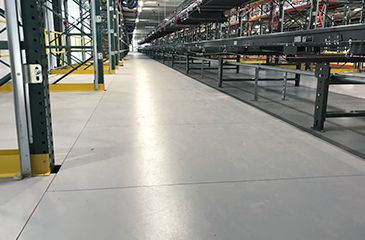 Three Reasons Why Your Industrial Mezzanine Floors Should Have IAPMO Validation 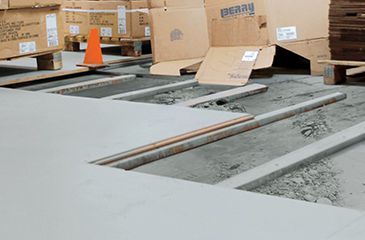 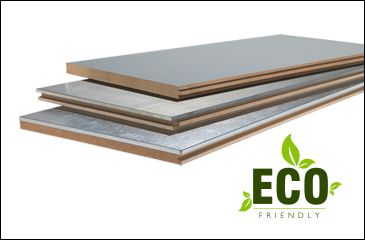 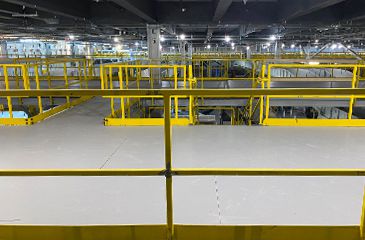 Benefits of a Mezzanine Floor 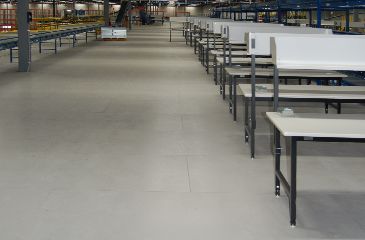 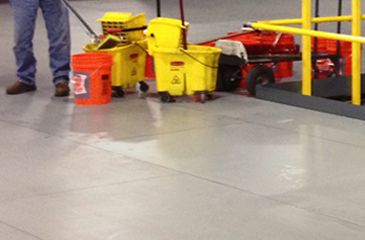 Are Your Industrial Floors Safe? 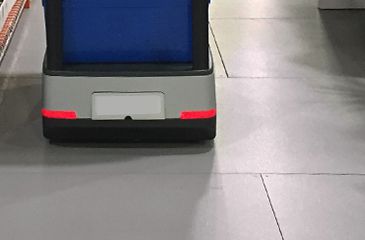 Warehouse Robots and Why Flooring is Important 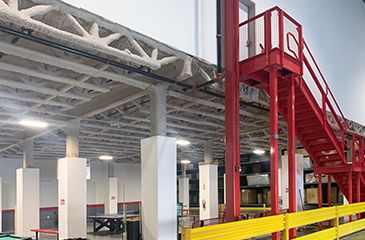 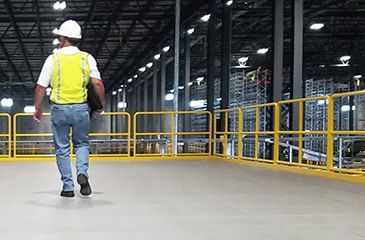 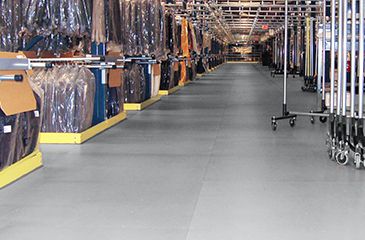 Electrostatic Dissipative Flooring vs. Anti-Static Flooring: Which Flooring is Right for Your Facility? 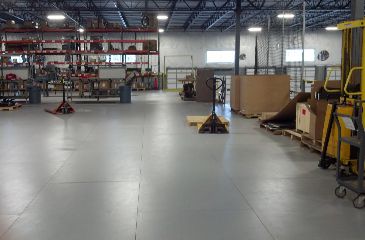 History of Industrial Work Platforms in the United States 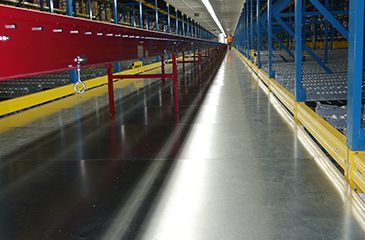 New ResinDek with MetaGard® Finish: Our Strongest Surface Option Yet 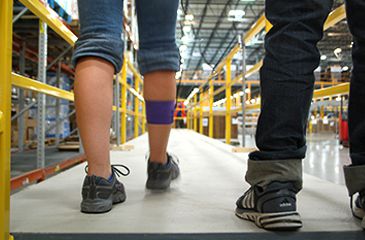